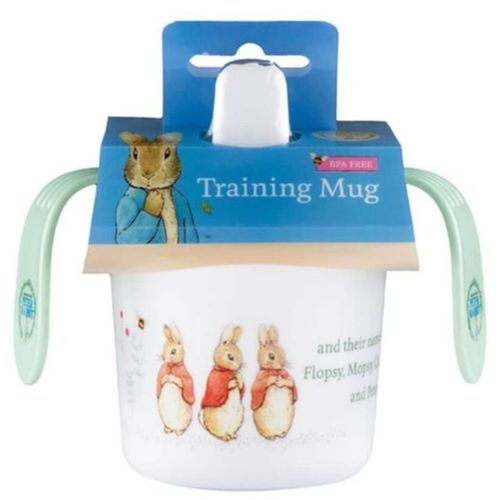 Little ones will enjoy learning how to self-feed with this adorable training mug from the world of Beatrix Potter. Featuring two handles and a non-spill removable lid. It is designed to go from sippy cup to mug as your toddler grows.

Caption reads 'Once upon a time... there were four little Rabbits, and their names were Flopsy, Mopsy, Cotton-tail and Peter'.

The Tale of Peter Rabbit is a British children's book written and illustrated by Beatrix Potter that follows mischievous and disobedient young Peter Rabbit, first published in October 1902.

The story focuses on a family of anthropomorphic rabbits, the widowed mother rabbit cautioning her young against entering a vegetable garden grown by a man named Mr John McGregor, whose wife, named only as Mrs McGregor, had baked her deceased husband into a pie. Whereas her three daughters obediently refrain from entering the garden, going down the lane to pick blackberries, her rebellious son Peter defies his mother by trespassing into the garden to snack on some vegetables.

Peter ends up eating more than is good for him and goes looking parsley to cure his stomach ache. However, Peter is spotted by Mr McGregor and loses his jacket and shoes while trying to escape. He hides in a watering can in a shed, but then has to run away again when Mr Mcgregor finds him, and ends up completely lost.
After sneaking past a cat, Peter sees the gate where he entered the garden from a distance and heads for it, despite being spotted and chased by Mr McGregor again. He finds difficulties in wriggling beneath the gate, but manages to escape the garden, only to spot his abandoned clothing articles being used to dress Mr McGregor's scarecrow.
After returning home, a sickened Peter is bedridden by his mother whereas his well-behaved sisters receive a sumptuous dinner of milk and berries as opposed to Peter's supper of chamomile tea. See more information about Peter Rabbit here.